Bear and I were  in Regina last weekend for the KAOS DogSports Rally Obedience trial.

In true nervous fashion I was up at 6:50am the morning of the trial and forced myself to lounged in the hotel until 10am after housekeeping knocked on our door for the third time. Even then, we had quite a few hours of waiting before our runs.

Our first run was an Excellent C run. Bear got sucked in by the food bowls, then I made a ton of mistakes. In the C stream there is no room for mistakes we needed  a score of 190 to qualify and even if we did not retry anything we would have been well over 10 points worth of deductions.

Our second run was in Excellent Team and we managed to get a video of our half of the run below.

Bear had a fantastic run but our team partner did not we didn’t earn a qualifying leg. Team is a challenging class and we have been the cause of a lost Q in a team run too so I was not overly worried or disappointed. What mattered was that Bear had a better run which made me very optimistic that our versatility runs would go well.

Our first Versatility course was tough, lots of angles which were confusing and required more of my attention than Bear could tolerate. We had quite a few deductions for Bear being out of position and my subsequent extra cues. We then had a muck up at the off side weave poles which earned us an NQ for improperly performing the station. I was really disappointed because I really wanted that Q and of course the next course contained the tunnel which is always a challenge for us. I was certain we were doomed to go home without our title.

During the walkthrough for the final Versatility class, I hatched a plan for avoiding the tunnel because working around it would be our biggest challenge. I used the entire walkthrough. During our run Bear did drift a couple of times however he only paid attention to the tunnel when he was supposed to and we managed to qualify with a score of 186 – WE DID IT!!!!!!

For all the hard work, I bought Bear a fabulous tug toy, made of boiled wool. 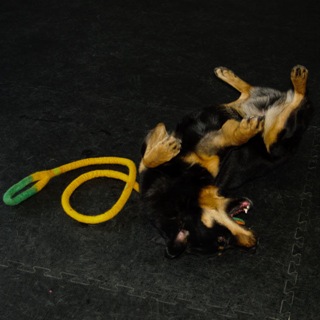 It’s about 6 feet long, which is long enough to keep his teeth far, far away from my hands, it’s very strong and it’s made of texture that he loves. Best of all, I purchased it online through http://dogztore.ca/ and was able to pick it up at the trial and avoid paying shipping fees!