Epic and I have been working a lot on heeling lately for rally trials. Occasionally Epic will drift a tiny bit. Sometimes it’s a forge, sometimes a lag, it doesn’t seem to be consistent. I want to help her and so I say “Here Epic!”. This causes Epic to come to me, and then drift away almost instantly scanning the room. This part is consistent enough that I know it’s something she’s learned but I’ve been struggling with where the communication breakdown is.

After watching some video, I finally realized that “Here” is the cue I use to indicate there is food on offer and I’m going to throw it for her to snatch out of the air, or to chase along the floor. I have used this cue consistently since we started training. So consistently, in fact, that I can go to video of myself with 4 month old Epic and hear myself use it. To Epic, the cue I have been using does not actually mean what I want it to mean, which is “Pay attention,  something exciting is going to happen!” To Epic, “Here” means, “Pay attention because you are going to have to chase something soon, and you better be ready to catch it”. OOPSIE! 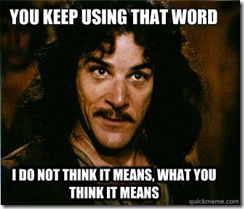 After some thought, I came up with a potential solution. In order to rectify the cue confusion, all I need is another word that means, “pay attention come to me, something exciting is going to happen”. Simple right?

Removing one word from my nervous chatty vocabulary is going to be really hard for me. I have major brain/mouth disconnect when handling either dog. I see something happen and plan to adjust my handling by spitting out an appropriate cue. Ninety per cent of the time, a different cue comes out or I spend so much time thinking about what I’m going to say that I spit the correct cue out at the wrong time, usually too late!

As I write this, I wonder if it’s a nerves thing or if it’s some kind of processing disorder. Regardless, retraining my mouth is going to be really, really, REALLY hard. Like impossible hard. Or rather, impossible hard unless I break down learning to say the new word behaviour into tiny bits, much like I break down behaviours for any of my students, human, or canine. Right now, I’m looking at a three step process.

After some more thought, I realise that going through the process of teaching her this cue is going to be a lot of work, even if I work on steps one and two simultaneously.

I also realise that a “pay attention” cue is really useful and something I should teach Epic, but using the cue is going to cost us a lot of points in the CARO rally ring (and eventually the obedience ring), even if I save it for The Most Dire of Circumstances.

Especially if I save it for The Most Dire of Circumstances! If she’s so far gone in the ring that I need to use my cue once, I could live with it. Right now I can see myself needing it a few times and herein lies the problem: Teaching a new “pay attention and come to me” cue, to use when I find Epic is out of heel position, will do absolutely nothing to teach Epic to maintain heel position.

What is a blabber mouth trainer to do?

In the end I have decided to just stop ‘helping’ Epic with the extra cues if she drifts. That’s right. I’m shutting the hell up! If you know me at all, you know how hard this is going to be.

Instead, I am focusing on giving her as much positive reinforcement as I can when she is with me, in position. This means a click and a food, toy or play reward. Drifting means no cues, no begging, no pleading, no opportunity for reward. Sometimes I stop moving when she drifts, sometimes I take my cookies and “go home” by ending the session and thinking about how I can help her be more successful next time.

We’ve been working on this consciously for a couple of weeks and in practice I think this is really helping. In a “real life” scenario like the rally trial we attended last weekend, still revert back to the wrong cues and they were not helpful, as to be expected. Fortunately, they were not horribly hurtful. We did qualify once, but the second run, I was so nervous that I asked Epic for a wrong station. In over 100 runs, I have never once made that mistake once with Bear, but it’s not a surprising error when I consider hard I was focusing on trying to NOT use the useless cues. We have a few months before our next trial and now I know that I still have some work to do achieving fluency with my own behaviour (shutting up) as well as Epic’s (staying in position). Stay tuned for updates!