I finally decided to introduce Epic and Bear off leash without any barrier between them. Bear is not the most social dog out there. He does not play at daycare because he does not seem to tolerate anything from any dog and on top of that, he seems to have go to extremes (biting) to get other dogs to leave him alone.

Until now, Epic and Bear have been on an alternate crate rotation. They have seen each other through bars and neither seemed overly interested in the other. My initial plan was to introduce them at work where there is lots of space but it occurred to me that there was lots of space in our yard and I would have Sean here to help, should the need for a second pair of hands arise.

I took Epic outdoors first and then Sean let Bear out. Bear looked at Epic and then walked to the opposite end of the yard – as if she did not exist.

Epic approached him slowly and sniffed him in all the right places. He sniffed her, they circled and then Bear walked away again.

As far as first introductions go – this was as close to perfect as I could have asked for.

Epic celebrated her 9 week birthday by attending her first day of Puppy Adventure Camp with me at Prairie Dog Daycare.

Her fellow camper was Cooper, a 13 week old Labrador Retriever, and they just loved each other!

Our off-site adventure  took us to the Wheat City Veterinary Clinic, one of the clinics on our Puppy Camp circuit where my friend Stephanie (a fellow Rottweiler owner) works.

At the clinic both puppies got up on the scale, met all of the clinic staff and got a ton of cookies. 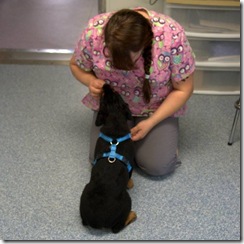 After Puppy Camp, Epic had a big long Nap and then we went to visit my friend Kathy who will be my conformation guru. Kathy put Epic on the grooming table, brushed her, and then checked her ears, her feet and her mouth. Epic was okay with all of this except the mouth check, which she tried to wiggle out of so I guess I have to work on this for showing!

Then Epic got down on the floor and met Kathy’s German Shorthaired Pointer, Cowboy and her Afghan Hound, JarJar. 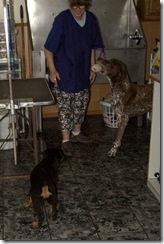 I had to make a trip to Winnipeg to pick up a raw dog food order and drop off some cooling mats to a friend at an agility trial, so I decided to take Epic along for the ride and for the socialisation.

At the agility trial, she got to meet a whole bunch of men, women, dogs of all sizes and even a very sweet 14 week old Springer Spaniel named Cinnamon. She also got to take a dip in the kiddie pool.

Sean was in Winnipeg at a football game so Epic, Bear and I were home alone all day. In the early afternoon I let Bear and Epic out together for a few minutes in the house. They sniffed around, investigated the living room and then – wonder of wonders – Bear offered Epic a play bow! I didn’t believe my eyes, but he did it again and then they started a game of chase around the house. I let this go on for about 5 minutes and then settled Bear in his crate for a nap before the play could escalate into anything else.

Today was Epic’s first class – Puppy Play Group at Two Brown Dogs. Puppy Playgroup is a puppy only, off leash class where puppies learn to play with dogs their age, learn to interact appropriately with different people and get to try walking on, under, and through various equipment. In our class this time was Cooper (from Puppy Adventure Camp) and a Beagle named Copper. Epic played with both boys and even though copper the Beagle is closer to her age, she preferred to wrestle with Cooper the Lab.

Epic ran through the puppy tunnel, over the teeter board and sat down on the wobble board. None of this was new to her (Perri had these puppies started on these things early.) but this was a new location for these things so I was pleased she had the confidence to try them out.

We also got a chance to practice recalls, sits, downs and settle. Epic was a princess.

I got a call from Perri, Epic’s breeder, to see how things were going with Epic now that she had been with us for a week.  Aside from Epic’s intense displeasure at being crated alone through my work day, and a bit of off an on diarrhoea, things were going as I expected them to. Epic was eating well, sleeping from 10pm to 6:30am and so much fun to train. What is more, Bear seemed to accept her, which lowered my stress about managing the two of them together a considerable amount.